The event was a choral and orchestral performance of the work featuring the Ascolta Choir, the Finchley Children’s Music Group (age 9-15) and the 15-piece Pictures of Life Orchestra conducted by Peter Broadbent, together with four outstanding soloists: baritone Rodney Earl Clarke, bass Richard Wiegold, soprano Eloise Iriving and mezzo-soprano Hannah Poulsom, plus the barbershop quartet ‘A Cut Above’.

The Artistic Director for the concert was award winning Martin Constantine, founder and director of ENO Opera Works.

The event was managed by Jenny Burgess of Blue Orb Events and was held in support of 21st Century Tiger which raises funds for wild tiger conservation projects. The evening was opened by the Mayor of Islington with the Mayor of Camden also in attendance. 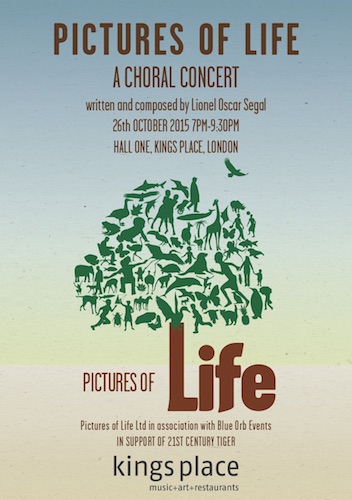 Pictures of Life was first previewed at St Pancras International Station with a young amateur choir and keyboard accompaniment. Later the same day, Steven Edis conducted the choir and an 11-piece ensemble before an appreciative audience at the Camden Centre in aid of the World Land Trust (Patron: Sir David Attenborough).

Get in touch to find out more! CONTACT US